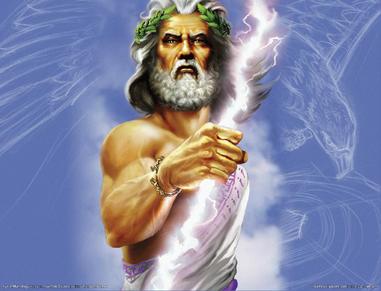 ΖЄÚζ – (Greek: Ζεύς, Zeús) In Greek Mythology Zeus is the king of the gods of Olympus. The Romans call him Jupiter and the Egyptians knew him as Amen. He rules the heavens, the sky, and is the master of lightning and thunder. Zeus was the youngest Son of Kronus and Rhea, and according to legend Kronus was warned that like he and his siblings did their father Uranus, his offspring would one day overthrow him.

His solution or cure for this was to swallow his children as they were born. He swallowed Hestia, Demeter, Hera, Hades, and Poseidon but Rhea his wife, who was also his sister, managed to spare their youngest son Zeus and hide him in Crete. She gave her husband a rock wrapped in swaddling clothes and he believed it was his youngest son and promptly swallowed it.

Zeus was hidden in a cave on Mount Dicte and nursed and raised by a divine goat named Amaltheia. When he was grown he returned to his father and with the help from Metis who gave Kronus some kind of emetic potion that caused him to vomit up Zeus’ five siblings, Zeus led a revolt against his father and the dynasty of Titans, defeated and banished them to Tartarus. After he had control he and his brothers Hades and Poseidon divided the Earth. Zeus was given the heavens, Poseidon the waters, and Hades the underworld. Zeus was a supreme ruler and upheld all the universal laws, upholding justice and morals, which was why he was considered a spiritual leader of both the immortals and mortals. He was also considered a celestial immortal and the Greeks originally worshiped him as the weather god. He remains associated with being a weather god because of his attributes that include controlling thunder and lightning with a scepter, the eagle, and his aegis which is the goatskin of Amaltheia.

In the beginning he was considered the protector of kings and their families but when the age of Greek kings faded and democracy rose, he became chief judge and peacemaker. He was viewed most importantly as a civic god who brought peace in any place of violence.

The animals associated with Zeus are the Bull and the Eagle. He is also associated with thunder and lightning storms. His domains are law, war, strength, and the air. His primary worshipers are the Nobles, leaders, rulers, and the military or soldiers. His temples are the Dodonna in Epirus, the Temple of Zeus at Olympia in Elis, and the home of the Olympic Games.