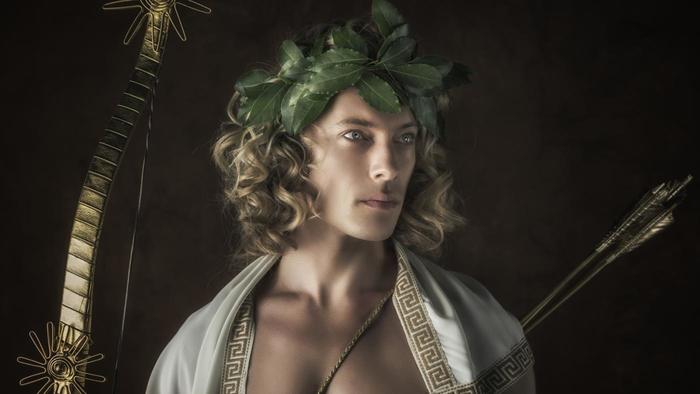 Áðüëëùí-Apollo, byname PHOEBUS. He is the most revered and had the most influence among the Greek gods. He's the Sun god and the considered Divine and distant. He was also known to send threats via prophets and Oracles. He lead all laws of religion and that governed. He spoke of things he could see in the future and delivered messages about his father's will to humans. Some say only his parents could be in his presense for for long periods of time. He was greatly feared because his messages often foretold of death, war, and terror. He was also musical, playing the Lyre and fostered the joy of communion through music, poetry, and dancing. He was also a god of harvest, crops and herbs, guarding the harvest against wild animals and disease. One of his epithet is Alexikakos the averter of evil, and Phoebus means pure light.

Some of his other epithets are Nomios a heardsman and Lyceius protecting flocks from wolves. It's been argued this was his original purpose. Apollo is the most Hellenic of all gods. He is Artemis's twin brother. He obtained the oracle of Delphi after slaying the dragon Python who gaurded the area where the oracle was located. Apollo took on the guise of a dolphin and commodered a ship renaming Pytho Delphi after the dophin Deiphis. Apollo had other oracles in Greece, Delos and Anatolia but there were not as prominant as Delphi. The Greek festivals that honour Apollo.

Apollo had many unfortunate love affairs that included: Daphne, who was changed into a laurel in her efforts to escape him. Coronis was unfaithful so Artemis shot her, and Cassandra (daughter of King Priam of Troy) rejected his advances and was punished by being made to utter trues no one believed.