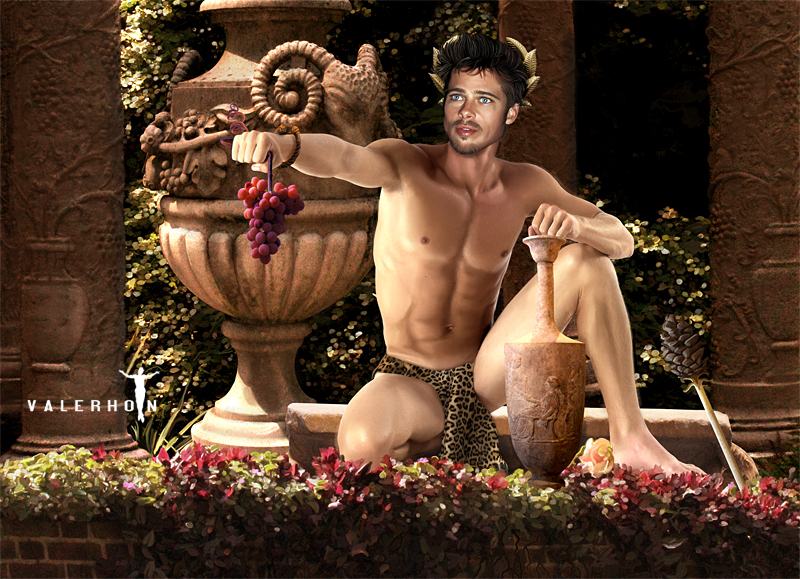 Διώνυσος or Διόνυσος – Dionysus is the son of Zeus and either Semele or Persephone. Romans associated him with the Italic Liber. This is because of how he was born. He was the son of Persephone and when Hera found out, she sent titans to lure him away from his mother with toys and they ripped him apart. Zeus drove them away but all that was left was his heart. Zeus feed the heart to Semele a mortal and Dionysus was reborn.

Dionysus is known as the god of wine and represents the intoxicating power of wine as well as its social beneficent influences. He promoted civilization, is a lawgiver, and lover of peace. He is also the patron deity of both agriculture and the theater. He is also known as Eleutherios which means liberator. He is called this because of his ability to free people from their normal selves either by madness somethng he causes when he's angry, orgies ecstasy, or wine ending care and worries. He preside over psychics and mastered the ability to communicate between the living and the dead.

Dionysus is is the one who gave Midas the Midas touch, which is the ability to turn everything he touched to gold. Midas asked for this ability when Silenus passed out in Midas rose garden and Dionysus was so glad he was found alive and well he granted Midas the gift he asked for. Midas was thrilled with his new gift until he touched his family members and they turned into gold and he couldn't touch his food because it turned to gold as well. He wanted to be rid of the power and begged Dionysus to take the power away because he was starving. Dionysus told Midas to wash himself in the River Pactolus. When he touched the waters the power passed into them and the sand around the river turned gold, which is the cosmogony as to why the sands near the river Pactolus are so rich in gold. Things associated with Dionysus are the pine-cone staff, and his domains are Plants and Trickery. His main worshipers are Actors, Playwrights, Entertainers, and Vintners. His temples can be found in Orchomenus, Athens, Lesbos, and Naxos.