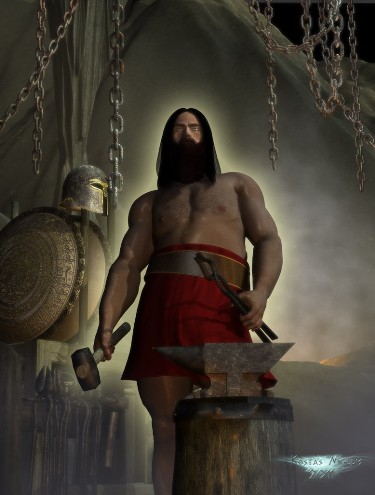 Ἡφαιστος – Hephaestus is the son of Zeus and Hera. In Roman mythology he is also known as Vulcan. Although he is Ares whole brother it is said Hera made him on her own thus he was born deformed. She did this because she was jealous of Zeus making Athena by himself. Hera upset about Hephaestus because he was so malformed and threw him from Olympus. It created a bond between him and Athena who is the goddess of wisdom and war and he makes all her weapons. Hephaestus made weapons for the gods and humans and gave each of them special powers..

Hephaestus is the god of blacksmiths, craftsmen, artisans, sculptors, metals and metallurgy, and fire. When Hera threw him from Olympus he landed in a village on Earth and established himself as a skilled blacksmith, living respectfully among the mortals. But he was found and brought back to Olympus. He is worshipped in all manufacturing and indsutrial centers in Greece, espcially Athens. Hephaestus is the only Olympian said to be very ugly and crippled. he has a lame bent foot and walks leaned over. He requires a stick or crutch to walk. Things associated with Hephaestus are the Hammer, tongs, fire, and strength. He is worshiped most by Blacksmiths, Bronzeworkers, Armourers, and jewelers. His influence and temples are found in Lemnos and various sites on Sicily. His forge is said to be in Mt. Etna.